BA Johnston on his songwriting process, developing his live show, and how long the audiobook of Stephen King’s Under the Dome is

BA Johnston is one of my favourite contemporary musicians — a funny and often touching songwriter, but more and most importantly the best performer I’ve ever seen. If you haven’t seen his scrappy one-man show (no excuse — it’s always free at the *reads name off hand* Jimmy Jazz, and I swear he’s there like every six months), I don’t even want to describe it to you. Just go, yo. Live your best life.

I was fortunate enough to interview BA in the fall, and additionally fortunate to photograph his show at the Jim Jazz this spring. Happily, I caught many key moments — from snot rockets to bathroom-sink encores. Hope you enjoy. 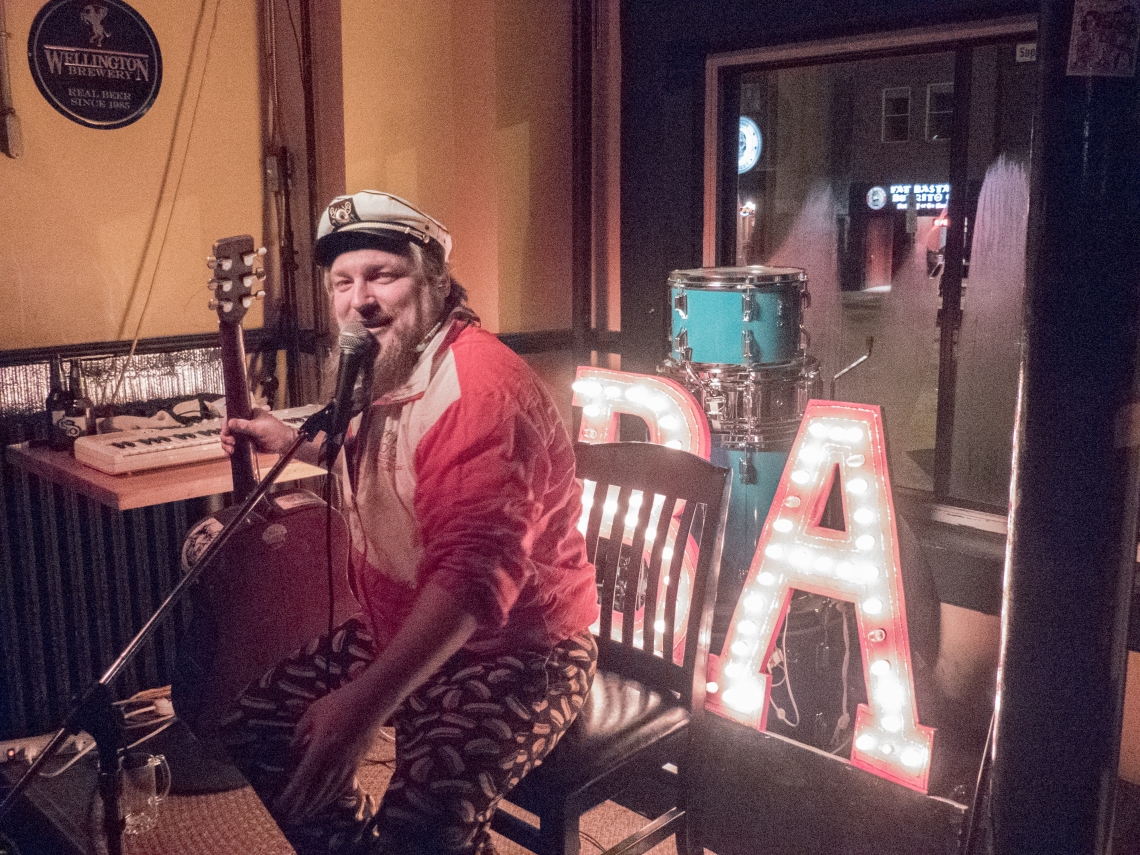 Will Wellington: So BA, I’m wondering how and when did you start playing music?

BA Johnston: That’s a good question. I think my first show was in 1994. I started ‘cause I was jealous of people that were in bands.

WW: Were you hanging out with a lot of people who were in bands?

BA: Yeah, in Hamilton in those days the high schools had lots of bands. It was very popular to be in a band. You got free beer and you’d get like forty dollars. And I was very jealous. I wanted the forty dollars for myself.

WW: Were you always playing on your own, did you ever play with a band?

BA: No. I tried, I’m just really bad at music. That didn’t help me there. 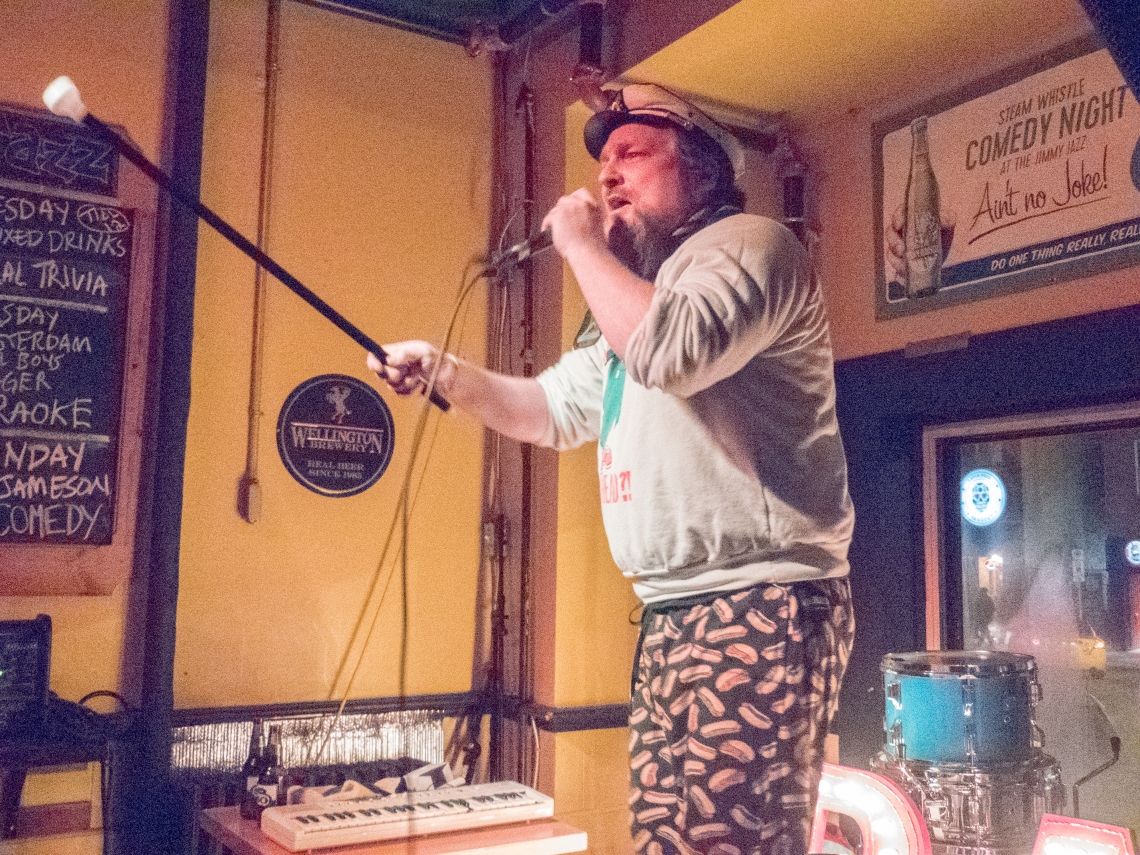 WW: How did you learn to play music?

BA: I just got my roommate’s guitar — I just kind of stole it, and tried to learn how to make it sound good. Not sure I was that successful.

WW: I take it your playing mostly comes out of whatever the song needs as opposed to you being interested in actually knowing how to play the instruments.

BA: I gave up on wanting to know how it works a long time ago, unfortunately. I never quite got it. I think I’ve gone as far as I’m going to go.

WW: Well, I don’t think you really need it, which is good.

BA: It would be nice to have a fourth chord.

BA: To break things up a bit, you know? WW: Well, how did you develop the BA stage show? It’s such a well-oiled machine at this point.

BA: Well, it’s decades later. It’s all just tricks. Bar audiences hate people with acoustic guitars the most. Usually, they’re the most depressed if they see that’s about to happen. So I had to develop little tricks to get them to pay attention.

WW: Do you take inspiration from old school film comedians? Your show kind of reminds me of a vaudeville show or something like that.

BA: I do like a lot of old comedians. I try and steal as much as I can — and young people don’t know about them, so they assume they’re your jokes. There’s one joke I do that’s like “I used to be a bum — like yourself,” which I’ve been doing for a long time. I just stole that from the Three Stooges. But I don’t think people watch the Three Stooges now, so I think I’m all right. But now that I’ve admitted it to you, the secret’s out.

WW: So what’s your writing process like, when you sit down to compose a new album?

BA: Well, I usually don’t want to do it, because I’ve been playing the old record for years. So I just force myself to sit in a closet with a beer and a guitar — usually the beer gets me in the closet, and then I just sit in there every night until it becomes easier to sit in there. Usually the first few songs are duds, and then by the end you’re just cranking them out. It’s like anything, you have to practice at it. If you’re not doing it for a while, it takes a while to get back in the swing of things. WW: So why the closet?

BA: I dunno. There’s nothing in there. It’s kind of a big closet — more of a storage room, I guess. It’s a very large closet or a very small storage space. There’s a Pac-Man machine in there, so sometimes I play Pac-Man.

WW: And how long do you spend on a particular song?

BA: It varies. The longest it would maybe take would be two weeks, maybe a bit longer. And then the shortest, sometimes it’s just an hour. Usually the hits are really quick, and the filler is more time consuming.

WW: The best ones are conversely the ones that just come to you?

BA: Yeah, like on the last record, some of the songs I play live, there’s a few of them that I just did in one night — really fast.

BA: …“No Frills,” from the record before. I remember there were like two songs where it was like, “Bang! Bang!” — in a night they were done and they were both good. I can’t remember which ones now, unfortunately. 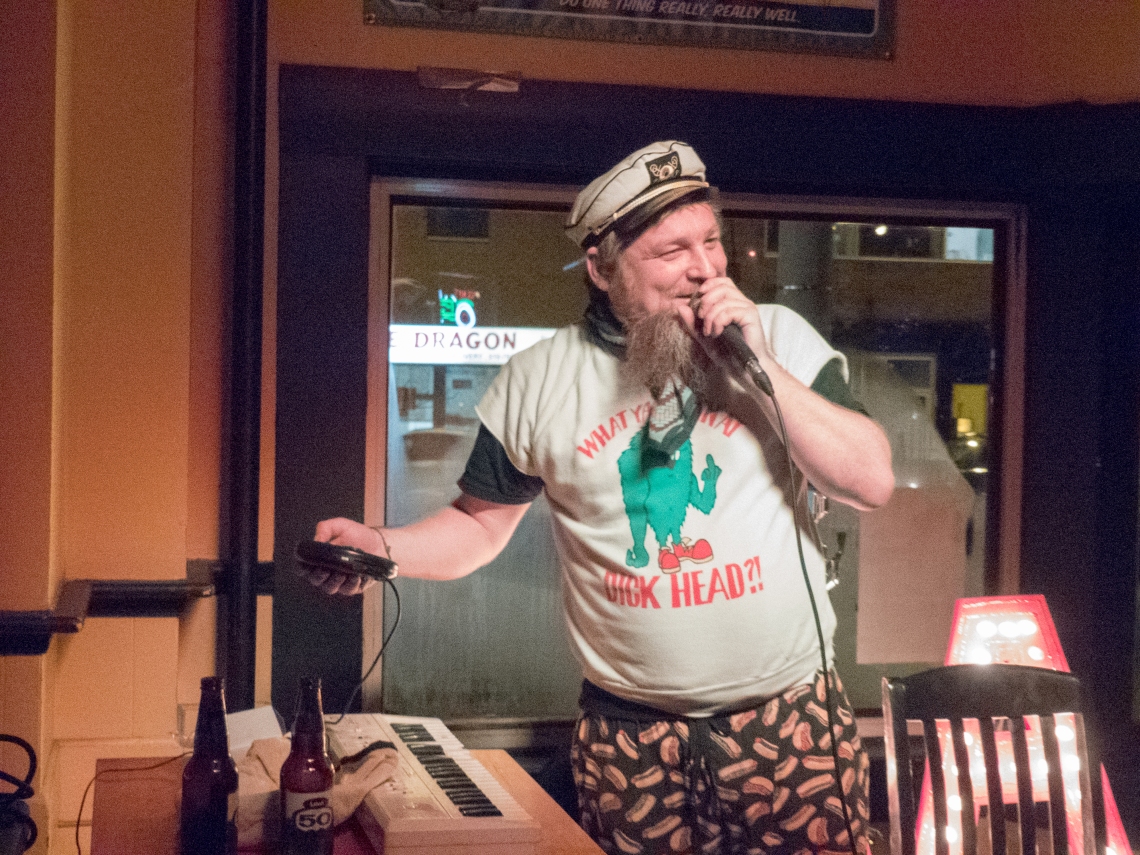 WW: Do you remember the first song you ever wrote?

BA: …No. [Laughter] I don’t really. It was a really long time ago. It was probably quite bad.

WW: When you started performing, because you were jealous of your friends in bands, were you writing your own songs right off the bat? Did you start with any covers or anything like that?

BA: I think I did a Daniel Johnston cover. I crank-called my brother and recorded it, kind of like the Jerky Boys. And I played it on a tape deck — him, like, freakin’ out.

BA: “Drivethru Beef” is kind of good. People seem to like that a lot.

WW: Have you seen the movie The Room? I just watched it this week, and The Disaster Artist is coming out soon. The different gags the audience waits for in your show remind me of the different little bits in The Room, like the spoons that you throw at the screen.

BA: Yeah, I can see that. I’ve never thought of that before, kind of like the parts of the bad movie that are the best ones, like “You’re tearing me apart, Lisa!” There’s definitely little things that people do if they’ve seen me a lot. Like there’s that part where they shout, and at the “audacity” line they yell “audacity.” So there are little Rocky Horror Picture Show things that for some reason have got picked up, which is kind of cool.

WW: I’ve read that you listen to audiobooks while you tour.

WW: What have you been listening to recently, or what’s the best one you’ve ever heard?

BA: Well, I don’t listen to anything good. Mostly I just listen to really bad thriller/crime books because I find they keep me awake. Probably the most successful audiobook stuff for me is Stephen King, just because his books are usually really long. So you have to drive for like twenty hours — I think I listened to Under the Dome for like a week, and I was in the car all of the time. They tend to get you through, because when I drive home from a tour — the last drive was four straight days. So for something that long you kind of want to have something meaty, because the radio is always unreliable and my van doesn’t have a auxiliary [input].

WW: Canada seems like the worst possible place to be a touring musician.

BA: It’s pretty crummy, man. You hear stories about people who go to Europe, and they’re like, “We played a castle! And we got a hotel, and they fed us breakfast and dinner.” In Canada, they hate your guts. All the bars think you’re scum. This weekend I played one show [where] I had to do door, sound, set everything up, and play. Then the other night they basically accused me of stealing, and there was no bouncer so I had to throw a guy out during my show as I’m singing. I had to push a guy out a door. The bartenders just look at you like you’re the worst piece of crap on earth. It’s maybe better in Europe — I fear I’m just too Canadian to make that work.

WW: Weren’t you just in Europe on a tour [last summer]?

BA: Yeah, I went to England. It was pretty good. They still hate you over there, too. Still, better beer. They give you a lot more food and beer [than in Canada]. And they don’t tip over there, so if you tip? [You get] quality service. They’re quite appreciative.

WW: I was talking to my uncle, who was a bar musician a couple decades ago in Winnipeg and he was apparently able to make a really killer living just playing in different bars every night of the week in this one city. To me, your career seems quite exceptional in that you make a living out of being the touring musician…

BA: Cover bands still get paid ok, I think. But I think even that well has run dry. You hear stories about the ‘70s and even the ‘80s where they were playing like Tuesday to Sunday, and then eventually just Thursday to Sunday, and they would make pretty good money. The figures you get quoted by people are usually surprisingly large. But I think bar culture’s changed a lot. And people hate bands now — they’re, like, the worst. [Laughter] 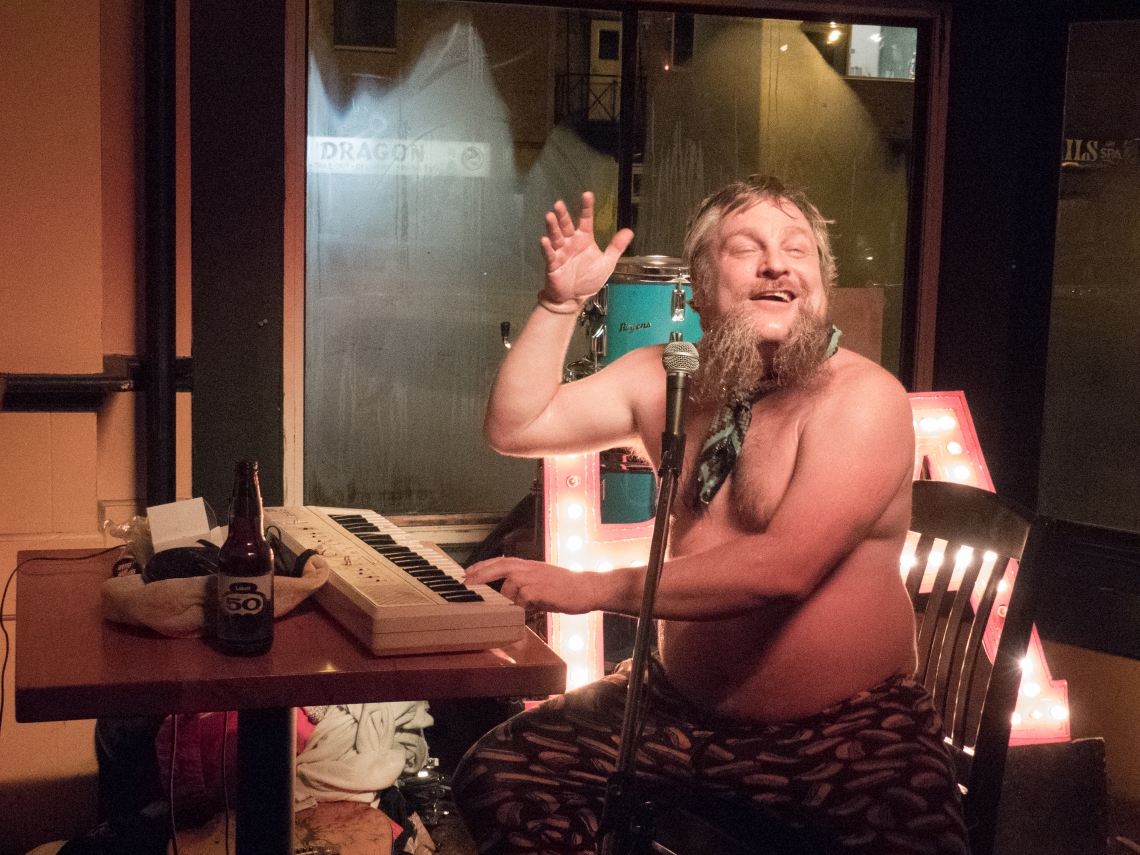 WW: You did your BA in philosophy — do you have a favourite philosopher?

BA: I was literally the worst student on earth. Like, I’m going to say Nishida, but I don’t even remember anything about Nishida, except that at one point in my life, I liked Nishida. [Laughter] Nietzsche kind of seemed like a dick, like a crazy dick. I didn’t get into him as much for some reason. Seemed like a crappy guy. I mostly took philosophy because we didn’t have classes on Fridays. That was a long time ago. Like, I think kids should pay attention and go to school and stuff, but I was a bad example.

BA: Mostly I just collect — and this is a little embarrassing — Savage Sword of Conan. It’s kind of the worst comic ever made, for sure. I also like the weird Gold Key [Comics,] like the early Donald Duck, Scrooge McDuck stuff. It’s kind of weird — makes me sound like a creep.

WW: I definitely read a lot of that stuff as a kid so it’s really meaningful to me now, but I don’t know a lot of grown people collecting those comics.

BA: I’m letting all [my secrets] out!

WW: Not trying to shame you!

BA: Well, when you buy them at the comic store — you’re not buying the cool stuff, that’s for sure. I still go in and ask for Ralph Snart. I’ll be like “Yo, I need Ralph Snart.” Usually they’re just confused, but every once in a while they’ve got all these old Ralph Snarts — also not very cool.

WW: I might have the opportunity to interview Mathias Kom of The Burning Hell in the next little while.

BA: You should ask him why he hates touring Canada so much. It’s like his least favourite thing.

[I think I forgot to ask him — we’ll see when I get around to publishing that interview. You can read bits here.]

WW: I was wondering what working with Mathias on Gremlins III was like?

BA: It was great. He’s super on top of things. He knew exactly what he wanted to do, and I need someone because my musical ability is so limited. Having him there was great. I think he did a great job. He had a lot of ideas for the songs. 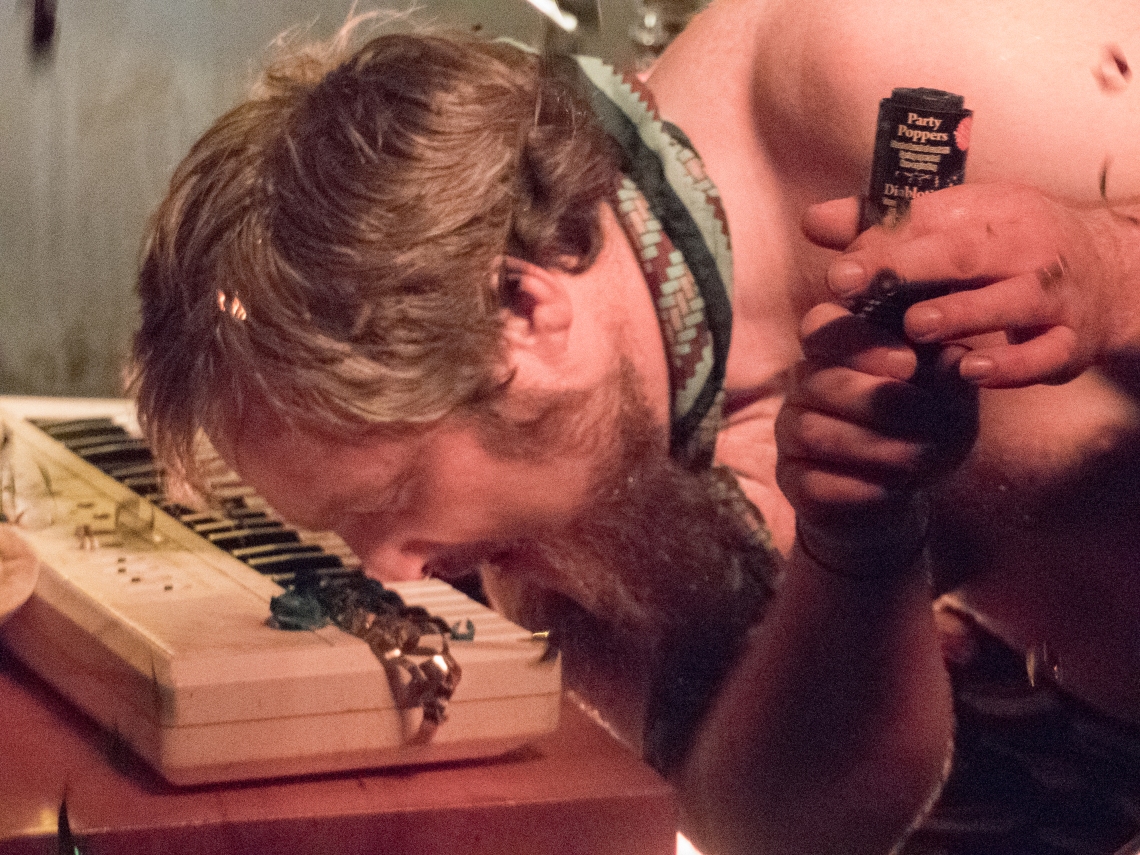 Photos by Will Wellington